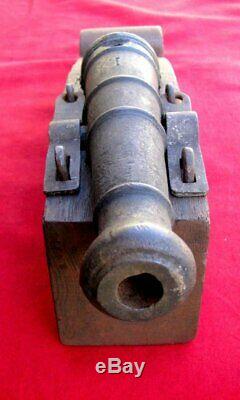 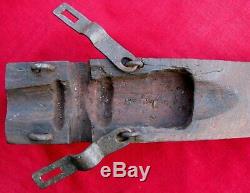 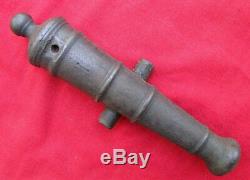 MARITIME NAVAL HAND CAST IRON SIGNAL CANNON. WITH THE ORIGINAL TIGER OAK & IRON CANNON CARRIAGE. This 18th Century Cast Iron Signal Cannon Barrel is a miniature of the identical pattern of the full sized Warfare cannons that were mounted in rows of Man-of-War ships from England, France and Spain when Wars were decided by Naval battles fought on the high seas during the 1700's.

This 18th Century Maritime Naval heavy duty signal cannon is made from Cast Iron. The cannon discharge makes a loud noise that resonates on the open sea, and also produces a large cloud of smoke visible at long distances. Overall, this piece is 16" 1/4"long from the barrel tip to the rear of the carriage.

The barrel has a thin raised reinforcement barrel band near the muzzle, and three more double thick reinforcement bands of increasing diameter from the front to the back. The two side protrusions of the Cannon are lugs used to anchor the cannon to the carriage, and are about 3 3/8" wide x 13/16" diameter. The touch hole is about 5/16 in diameter, and tapers inward.

Light can be seen at the muzzle when shining a light into the touch hole, and the bore has crud lining the sides and is in untouched, as found condition that should be left as is. This cannon appears to not have been fired in 100, perhaps 200 years. The top of the cannon barrel has a marking of two dots connected by a straight line, with another dot to the right. This appears to be alignment mark for the bore, or perhaps a foundry marking. There is a faint Maker mark in a circle on the bottom side of the barrel. Although the casting mark is shallow and indecipherable, it is unusual to find any Maker mark on an 18th Century signal cannon; and demonstrates the quality and craftmanship of the foundry. The barrel has a deep, dark naturally aged patina overall, and had not been cleaned, buffed or polished; the untouched condition that collectors love to see. This piece has the original hand made wooden cannon carriage, specifically hand carved out for this cannon barrel.

This orginal 13 7/8" long x 3 5/16" wide x 4 1/8 tall custom made wooden carriage is made from scarce and desirable Tiger Oak, with it's distinctive stripped pattern resembling a tigers stripes; somewhat obscured by dirt and untouched debris, but is clearly seen in the cross cut grain on the top and bottom of the carriage. I would not stain, clean or touch the dark natural aging and patina of the wooden carriage, and leave it in untouched, as found condition.

From the front bottom of the base to the top of the barrel is 6. The carriage top has a series of curved, hand carved recesses into the top that fits the curvatures of the bottom of the Iron Cannon barrel bands to seat it securely; making the barrel and carriage one solid piece when firing the cannon. These 7 shaped indentations are hand hewn and show the marks of using hand tools such as chisels to gouge out and shape the custom made recesses to fit the barrel curvature and bands for this Cast Iron barrel. The original 18th Century iron carriage mounts are hand made for this Iron Cannon and carriage. There are two Iron straps with a hump in the center that fits over the two side protrusions of the Cast Iron Cannon barrel lugs to secure the cannon to the carriage; and allows the barrel to be removed for reloading or maintenance.

These 2 Iron straps are hand made and the rear holes are an uneven oblong shape and the front rectangular slots are uneven and show hand cut out marks from a chisel. The 4 U shaped Iron fasteners show the irregular shapes and sizes of being hand made with hammer marks, and secure the 2 Iron straps that hold the barrel to the carriage for quick removal; but could also be used to lock the barrel to the carriage. The Iron straps and U shaped fasteners show naturally occurring untouched aged patina. The bottom of the carriage has a 3" deep hole with untouched crud on the insides, made to fit a 1" diameter rod or peg that would be mounted on a ships railing to secure the swivel cannon and allow it to be rotated in the desired direction. The back of the carriage has a hole drilled through to accommodate a small rope used to absorb the cannon's recoil if fired on a flat surface, and to drag it into place on either the port or starboard side for signaling. All natural materials shrink over time. As expected, the wooden carriage has naturally occurring age cracks from being 250 years old.

This minor restoration is hardly noticeable in image 11, still appears as age cracks with the orginal patina intact; and certainly does not diminish the overall presentation of this rare piece. This is especially true since 18th Century signal cannons that are old as dirt, and rarely, if ever, have any carriage; much less an original Tiger Oak carriage with hand made Iron hardware.

The carriage weighs 2 lbs. The barrel weighs approximately 6 lbs. Total weight approximately 9 1/2 pounds. This piece is not a salvaged piece, has never been underwater or salvaged, is in uncleaned condition, and is an authentic 18th century signal cannon with natural aged patina on both the Iron and original oak carriage. I took dozens of images in both shade and sunlight and used image software to try to reflect the correct color and contrast.

This handsome, eye catching piece would be great in any 18th C. Nautical, Naval, Maritime, Arms, Cannon or Signal Cannon Collection or display; or keep it as a desk accessory, decorator or conversation piece in a Man Cave, any Office or Den.

BANK DRAFTS DRAWN ON A U. BANK CONSIDERED WITH PRIOR APPROVAL. Due to a myriad of International and U. DO NOT DUPLICATE OR COPY!

The item "AUTHENTIC 1700s CAST IRON 12 SIGNAL CANNON & ORIGINAL TIGER OAK / IRON CARRIAGE" is in sale since Wednesday, June 3, 2020. This item is in the category "Antiques\Maritime\Maritime Cannons & Cannon Balls". The seller is "1knifeguy1" and is located in Fairfield, California. This item can be shipped to United States.